Changes for the week ahead

Posted on July 7, 2019 by chrisbaileyweather

Good Sunday to one and all. We have one more day of steamy and stormy conditions before some changes settle in. This will bring a slightly better brand of air to start the week, but the tropics may become active and impact our weather late week or next weekend.

Let me begin with what’s shaking out there today. Scattered storms and steamy temps. That pretty much sums it up.

Better weather will be in store for Monday and Tuesday as mainly dry skies take control. Even then, an isolated shower or storm will be possible, but most stay dry.

A cold front drops in here later Wednesday and Thursday, bringing showers and storms back in here. That will also have a drop in temps behind it.

Since last week, I’ve been talking about the pattern being conducive for a tropical system in the Gulf Of Mexico. That scenario is looking more and more possible later this week into the coming weekend… With a twist. The disturbance responsible for this potential development is actually working out of western Kentucky and Tennessee and heading toward the Gulf.

Some tropical systems that develop close to the United States actually came from a non-tropical entity from land. Obviously, those make the transition to tropical and that’s what we are looking for in the week ahead. The National Hurricane Center is now highlighting this threat: 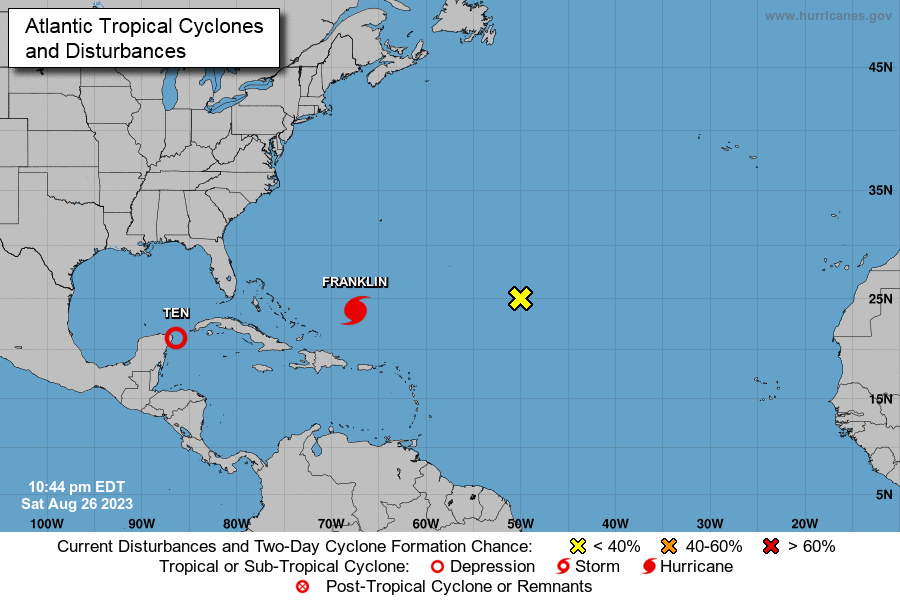 The European was the first model to jump on board with this system and continues to show a central Gulf Of Mexico hit by Friday or Saturday:

The GFS is even going toward this scenario:

To review… A system from Kentucky heads toward the Gulf and tries to become a tropical system. That may come ashore along the Gulf coast then head back toward where it started… Kentucky. Pretty wild, huh? Let’s see how this thing actually plays out in the coming days.

Once again, I leave you with your thunder tracking tools:

Have a wonderful Sunday and take care.